Preventing the “Bonk” by Fueling Properly During Endurance Exercise 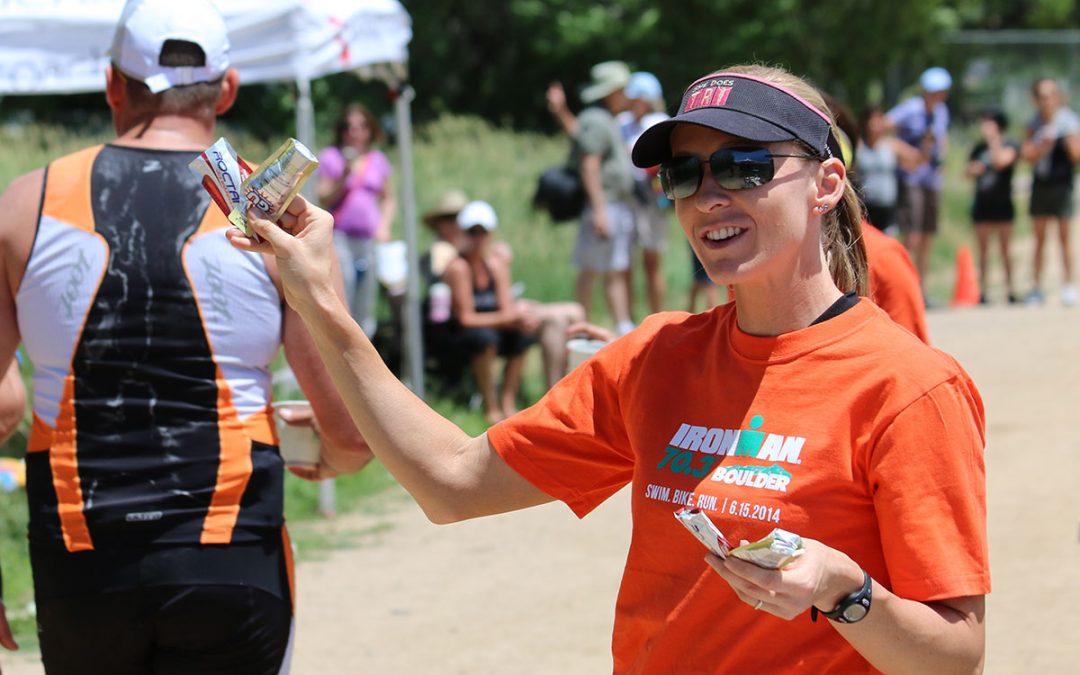 In my last blog post, I wrote about “bonking” (“hitting the wall” or “blowing up”) during endurance exercise and how it’s caused by low carbohydrate (glycogen) levels as the body uses up stored carbohydrates during exercise without adequate replacement. Remember that you won’t run low on protein or fat stores during exercise (unless it’s a lengthy multi-day event) so we’re primarily concerned with carbohydrates as the limiting macronutrient during exercise.

Let’s explore how to fuel during exercise to prevent bonking.

First, it’s important to note that carbohydrates are depleted faster as exercise intensity increases (less than an hour with intermittent high intensity intervals). At sustained relatively high intensity efforts like racing a marathon or IRONMAN Triathlon®, glycogen might be depleted in 2-3 hours (or longer as intensity decreases). By consuming carbohydrates in the form of sports drinks or other sources like gels during exercise, you keep adding fuel to the tank.

Let’s assume that you’ve ingested some carbohydrates a 1-3 hours before exercise (especially in the morning after fasting overnight) so that you start a race or training session with full glycogen stores.

How Much Can You Absorb?

If you’re not moving or walking around, you can eat a lot without discomfort. During exercise, however, the gastrointestinal (GI) system or gut is under stress from exercise because blood is shifted away from the gut to the working muscles and to the surface of the skin for cooling. As such, your body is not able to as easily absorb carbohydrates and having extra fluid or fuel in your stomach while exercising is uncomfortable. Research has also shown that GI problems are more likely to occur when consuming fiber, fat, protein and highly concentrated carbohydrates (e.g. gels) so it’s best to avoid any of these during training and racing. When taking a concentrated carbohydrate source like a gel, be sure to chase it with water for dilution. Other factors that will negatively impact absorption include: dehydration, heat and poor conditioning.

There’s also an upper limit to how much of a single type of carbohydrate like glucose or maltodextrin (chains of glucose molecules) that your body can actually absorb (up to 60 grams or roughly 240 calories per hour). However, if you take in another carbohydrate type (like fructose) at the same time, you can absorb more (up to 90 grams per hour). There has been some research that has shown that fructose can cause GI distress so best to test out in training. Also, the numbers are an upper limit. Smaller athletes will not need as many grams of carbohydrate as larger athletes.

The end result is that you won’t be able to replace all the carbohydrates that you use during exercise if you’re exercising at a relatively high intensity. Most athletes find that they will be able to eat more on the bike than they can on the run.

How Much Carbohydrate Should You Consume During Exercise?

In terms of how much carbohydrate to eat during endurance exercise, Professor Asker Jeukendrup, who’s also a triathlete, published an article titled A Step Towards Personalized Sports Nutrition: Carbohydrate Intake During Exercise,1 which nicely summarizes the current research and provides specific carbohydrate recommendations for exercise based on duration of exercise (or race) in this graphic:

What’s interesting to note above is that for shorter events where glycogen stores are not a limiting factor, rinsing one’s mouth with a carbohydrate solution has been linked to improved performance.

Research has shown that athletes can improve absorption with 4 to 8% carbohydrate solution plus sodium. Not only are you getting calories, but you are also staying hydrated. A typically serving for a sports drink will be 100 calories or 25 g carbohydrates. If you can drink most of your calories, you’ll be less likely have GI issues than when eating gels or solid foods like bars or bananas (lots of fructose!). A good place to start is with the sports drink that will be available on the course at your goal race to see if it works for you or not. If not, consider carrying bottles (or hydration pack) on your bike with a sports drink that you like (can also be concentrated then chased with water) and placing extra bottles in special needs bags (if available) at longer races.

How might your nutrition plan for an IRONMAN 70.3 triathlon look? I’ll assume 25 g (100 calories) of carbohydrate in a single bottle of sports drink or single gel.

In all cases, practice fueling in training before race day, especially during longer training sessions and at intensities similar to what you will maintain on race day.

Please remember: Nutrition strategies are highly individual. Therefore, it is absolutely critical to practice your own nutrition strategy. If you have nutritional issues that you cannot resolve, seek out a qualified nutrition expert.

Coach David B. Glover, MS, CSCS has completed 28 IRONMAN distance triathlons, which includes two sub 9 hour finishes and winning Vineman Full twice. Now, David’s passion now is helping triathlete and other endurance athletes achieve their dreams through his online triathlon education and training company, ENDURANCEWORKS. David has an MS in Exercise Physiology and is certified as a coach by IRONMAN Triathlon, USA Triathlon and USA Cycling as well as having the CSCS designation from NSCA. After six years of living, training and coaching in the triathlon mecca of Boulder, CO, David currently resides in Southern California.